Downtown is the hub for freeway network and public transportation.

Move your Mouse over picture to see the names of the buildings.
The Los Angeles skyline is ranked first in the Pacific Coast Region and fifth in the United States (after New York City, Chicago, Miami and Houston). The ten tallest buildings in Los Angeles are:

Video looking up at the tallest building in Los Angeles 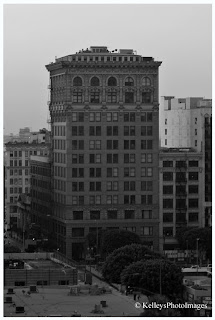 The first high-rise in Los Angeles was the Braly Building. The Braly Building was completed in 1903 it has 13 floors and stands 174 feet high. In 1904, the Los Angeles City Council enacted a 150-foot height limit on on future buildings. This building was originally a commercial structure and has since been renovated into a residential tower. It is now known as the "Continental Building".

The first known settlement in what is now downtown Los Angeles was close to the Los Angeles River by the Tongva, a Native American people. The settlement came to be known as El Pueblo de Nuestra Señora la Reina de los Angeles de Porciúncula or The Town of Our Lady the Queen of Angels of the Little Portion although its official name was simply El Pueblo de la Reina de Los Angeles. Europeans settled in the area later after Father Juan Crespi, a Spanish missionary, explored the area for Catholic missions in California. On September 4, 1781, Los Angeles was founded on the site now known as La Placita Olvera.

Land speculation increased in the 1880s, which saw a population of the city explode from 11,000 in 1880 to nearly 100,000 by 1896. Laying of a street grid and other infrastructure enhancements brought development to the area south of the original settlement into what are today the Civic Center and Historic Core neighborhoods.

By 1920, the city had been transformed into a large metropolitan area, with Downtown as the center. The city's rail lines connected four counties with over 1,100 miles of track. The banking institutions clustered around South Spring Street, forming the Spring Street Financial District. Sometimes referred to as "Wall Street of the West." The Los Angeles Stock Exchange was located here from 1929 until 1986. During the early part of the 20th century, many people worked and lived in Downtown Los Angeles. Following World War II, several factors led to the decline of Downtown Los Angeles including suburbanization and the development of the Los Angeles freeway network enabled many corporate headquarters and people to disperse to these new suburbs. The remaining financial corporations moved to newer buildings, leave the former Spring Street Financial District buildings vacate above the ground floor. Many historic office buildings were left intact. They were used for storage or left empty.


In 1999, the Los Angeles City Council passed an ordinance that made it easier for developers to convert vacant commercial and office buildings into renovated condo, lofts and luxury apartments. Residential population has increased from 28, 878 residents in 2006 to 39,537 in 2008. The Staples Center, which opened in 1999, has been a major contributing factor to the revitalization of Downtown Los Angeles. It added 250 events and approximately 4,000,000 visitors to this area.

Place mouse over time of day title for to change image.

Southern California does not have as dramatic seasons as does other parts of the world, but there is some difference. For clear blue skies, there are a few days a year after rain that there will be blue skies and possibly clouds. For the pictures shown above, the shot from Kenneth Hahn Recreational Area was during winter and it had been raining the day before. Other than summer, there are some sporadic overcast days. During the summer because of poor air quality and wildfires (little benefit for the possible devastation), there are beautiful sunrises and sunsets.