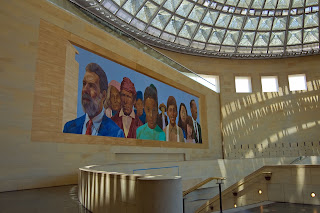 Before airplanes and automobiles were the preferred modes of transportation, millions of Americans utilized the railways. During the 1930's, there was pressure from local politics and business leaders, the three railroad companies (Southern Pacific, Atchison Topeka and Santa Fe, and Union Pacific) that serviced Los Angeles collarated to create a central terminus for the rail passengers.

Now Union Station is heavily visited because of the Metro Red, Purple and Gold Lines along with Amtrak and Metrolink. The attached Patsaouras Transit Plaza serves several bus lines including Metro Local lines as well as downtown DASH shuttles. 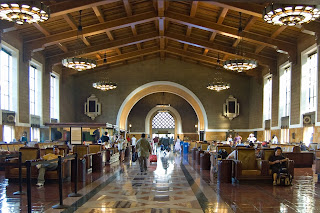 
Enclosed garden patios on either side of the waiting room and passengers exiting the trains were originally directed through the southern garden.

The left lobby is used for special events. There is tile and marble floor, acoustic wall treatment, integral wall clock, wood beam ceiling and disc-and-flower chandeliers of glass and metal. 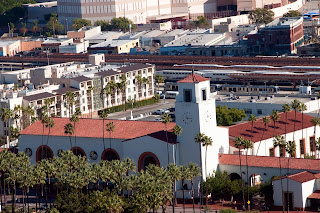