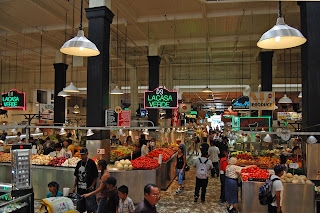 
Grand Central Market is on the ground floor of the Homer Laughlin Building. This building was built by Ohio entrepreneur Homer Laughlin. This was the first earthquake and fire proof building in Los Angeles. Homer Laughlin Building was designed in the Beaux Arts style. It was the fifth building in the United States, and the first building west of Chicago, to use concrete floors. Originally built in 1897 by architect John Parkinson and further expanded in 1905 by architect Harrison Albright. The landmark Grand Central Market opened in 1917.