Don Francisco Avila arrived in Los Angeles sometimes after 1794. He became a prosperous cattle rancher and the owner of the Rancho Las Cienegas (near the La Brea Tar Pits and Page Museum). In 1810, Avila married a local women, Maria del Rosario Verdugo, and became the alcalde, or mayor of Los Angeles. His family lived in the Avila Adobe until 1868, though in early 1847 following the Mexican-American War the house was occupied by Commodor Robert F. Stockton during peace nogatiations. In the following years, the Avila Adobe was rented to several families.

In 1930, the Avila Adobe was opened to the public as a tourist attraction being the oldest existing house in Los Angeles. After the renovation Christine Sterling lived in the house and gave tours until her death in 1963. After the Sylmar earthquake of 1971 caused damage to the Avila Adobe. It was closed for restoration and too five years to complete. It reopened in July 1977 and furnished as it might have looked in the late 1840's. A new structure added to the rear of the building was set up as a memorial to Christine Sterling. 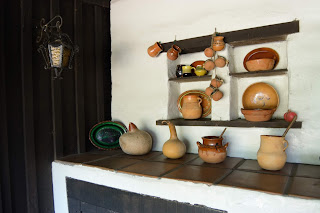 There are six rooms in the interior of the Avila Adobe House. The first room when entering the Avila is the family room which is the largest room in the house. It is used for a dining room and informal social gatherings. The black lacquer table is original and is possibly a 1822 wedding present for Doña Encarnación (Don Francisco Avila married Maria Encarnación). The master bedroom is the most beautiful room in the house. The spread is a Chinese shawl, the commode is English and the chest of drawers is 17th century Italian. The Canton trunk formaly belonged to the Avila Family. The children's room was shared by more than one child.