On then morning of April 29, 1986, a major fire occurred at the Los Angeles Central Library. Extinguishing the fire required sixty fire fighting companies, 1 arson unit, 9 paramedic rescue ambulences, 3 helicopters, 4 salvage companies, 1 squad, 2 emergency air units, a heavy utility company, and over 40 staff and support personnel, for a total of almost 350 Fire Department personnel. Approximately, 45% of the on duty Fire Department resources were committed to this fire. Members of this department were commended for their bravery, courage, determination and outstanding effort in controlling the loss of precious resource of the City of Los Angeles. There were no deaths or critical injuries and one minor civilian injury. There was an estimated loss of $2 million to the structure and $20 million to its contents. More importantly, 85% of the total value of the structure and contents were saved. There was a second fire on September 3 of the same year which destroyed the contents of the Music Department Reading Room.

In the main lobby on the first floor, Los Angeles artist Rebee Petropoulos painted the ceiling with a cornucopia of color, text and imagery. This 36 foot by 36 foot ceiling has Los Angeles novelists names intertwined in the design. Petropoulos as a statement about counterpoint to the building's symmetry painted the design off center. The light fixture is the center of the room.


The lanterns in the atrium, located at each escalator landing and entitled "Illumination" are designed by Anne Preston. The title Illumination refers to light, understanding and books. There is a latern at each escalator landing in the atrium. There is a fixture at the base that shines light up to a reflector located inside the latern which will illuminate light in the surrounding area.

There are more than 9,000 square feet of murals in the Lodwrick M. Cook Rotunda. There are four murals depicting four eras of California history:


Dean Cornwell was awarded the contract in 1927 and spend the next fived years doing research for the final canvas. Cornwell has distinguished himself with his murals and as a magazine illustrator. Completed in 1932, their color values were purposely restrained to harmonize with the many-colored mosaic-like dome decorations by Julian E. Garnsey. 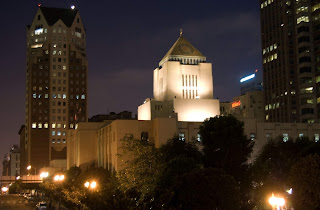