This is the Station House located at the top next to the fountain filled Watercourt at the California Plaza complex. The decorative Beaux-Arts archway entrance and station house were added around 1910.

Angels Flight has operated in two slightly different sites, using the same cars. This first Angels Flight operated from 1901 until 1969. Col. James Ward Eddy was the visionary who convinced City Hall to grant him a 30-year franchise to construct and operate an inclined railway. It connected the residential areas on the hill with shopping, financial and entertainment districts on Hill, Broadway and Spring streets. The ride lasted one minute and cost one cent.

The original Angels Flight, initially known as the "Los Angeles Incline Railway," ran northwest from the west corner of Third and Hill Streets. Angels flight consisted of two carriages. As one car ascended the other descended. The two cars Sinai and Olivet were named after mountains mentioned in The Bible. Originally, Sinai and Olivet were adorned in white. In the 1930's they were painted orange and black.

From 1905 until 1920 Angels Flight served the wealthy that lived in big Victorian houses. Later it served the less fortunate who lived in houses converted to flats, hotels, apartments and flop houses from the 1920's through the 1950's. After the most of the residences were destroyed, Angels Flight became more of a tourist attraction.


On September 5, 2013, one car derailed near the middle of the guideway. There were no injuries, but passengers had to be rescued from the cars by firefighters. The brake safety system had been bypassed with a small tree branch.  It was determined that the accident was the intentional bypass of the funicular safety system.

Plans to bring the railway back into service began in January 2017.  Safety upgrades were made.  Angels Flight reopened for public service on August 31, 2017. 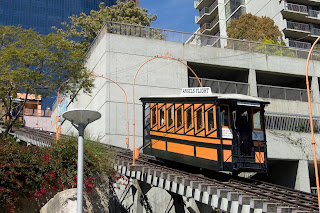