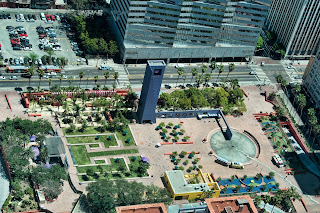 In 1867, St. Vincent College was across the street to the park. The park became informally known as St. Vincent's Park.  The park continued to be renamed.  In 1870 it was officially named Los Angeles Park and in 1886 it was renamed 6th Street Park.  It was redesigned with an "official park plan."  In the early 1890s the renaming continued and  the park became Central Park.


Public art included a walkway representing an earthquake fault line, a concert stage, a seasonal ice rink, and a small plaza with seating. Seasonal events occur in the park such as a temporary ice rink in the winter and live concerts in the summer.