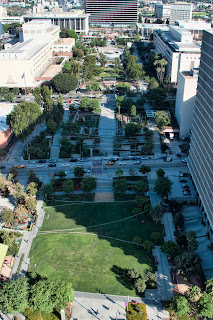 Grand Park is a 12-acre park located in the civic center of Los Angeles, California. It is part of the larger Grand Avenue Project, with its first phase having opened in July 2012.  Grand Park is part of a joint venture by the city of Los Angeles and Los Angeles County. It was designed and built by the Los-Angeles-based multidisciplinary design firm Rios Clementi Hale Studios.

Grand Park stretches between the Los Angeles City Hall and the Los Angeles Music Center on Grand Avenue. It is designed to be pedestrian friendly and connects Bunker Hill to the civic center. The park plans include tree-shaded sidewalks, drought-tolerant plants, an interactive fountain plaza, performance lawns and courtyards, plenty of street lights, movable park furniture, and kiosks to encourage the walking and exploration of the area. City officials and some visitors have compared Grand Park to other well-established urban parks such as New York's Central Park or San Francisco's Union Square.


Prior to the creation of Grand Park, the area was already a public space with plazas, fountains and a Court of Flags.

A city’s urban heart is an expression of its people, its diversity, its interests, and its passions. The new Grand Park, with its majestic views extending from the Music Center to City Hall, provides Angelenos of all walks of life a place where they can come together to celebrate, reflect, and shape the future, in one central gathering place. Throughout Grand Park, open spaces are available not only for casual sitting and leisurely strolling, but also for civic gatherings. Grand Park has four distinct areas featuring amenities ranging from a restored historic Arthur J. Will Memorial Fountain with a new wade-able membrane pool, a small intimate performance lawn, a community terrace planted with drought tolerant specimen plants representing the diverse cultural make-up of Los Angeles itself, and a grand event lawn. The new Grand Park allows for a strong visual and physical connection from Grand Avenue via a series of stairs, accessible ramps and sloped walks as well as a new elevator to invite more pedestrians into a vibrant garden environment, a place to come together in a welcoming and distinctly urban oasis.