Walt Disney Concert Hall is the home for the Los Angeles Philharmonic and the Los Angeles Master Chorale. This 3.6 acre complex includes public park, gardens, shops as wells as two outdoor amphitheaters for children's and preconcert events. The William K. Keck Children's Ampitheatre which has seating for 300. The Roy and Edna Disney/ CalArts Theater (REDCAT), is a 250 seat multi-use theater on the southwest corner of the complex.

Originally, Gehry intended the building to be covered in stone. It was changed to stainless steel. Partly because he felt the shiny surface would work well changing and reflecting from the Southern California sun. While the Walt Disney Concert Hall was being constructed, California experienced the 1994 Northidge earthquake. This 6.7 magnitude earthquake resulted in seventy-two deaths, over 9,000 injuries, and estimated $20 billion in damage. This was another factor in the decision to change the exterior to stainless steel. During the construction of the Hall, the Guggenheim Museum Bilbao and Cathedral of Our Lady of Angels were built. Frank Gehry was the architect for Guggenheim Museum Bilbao in Spain. This structure has huge carved and folded stainless steel and panels similar to the Disney Concert Hall. The Cathedral of Our Lady of Angels was built two blocks away. Both buildings were completed long before the Concert Hall grand opening. 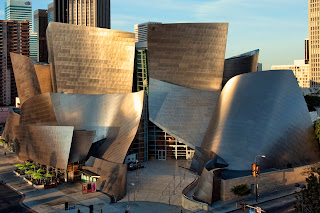 The long awaited ribbon-cutting ceremony was formally dedicated on October 20, 2003. This architectural landmark took 16 years and 274 million dollars to build. At the ceromony, building tycoon Eli Broad, one of the principal fund contributors for this building, said "The Walt Disney Concert Hall is a new symbol of our city." Broad continued that "It will really join the Eiffel tower in Paris, the parliament houses in London and the Sydney Opera House as one of the most photographed buildings in the world." Los Angeles Mayor James Hahn and outgoing Governor Gray Davis attended the ceremony. Gehry said he tried "to make it a beautiful room to listen to music and to experience the Los Angeles Philharmonic as it's never been experienced before." Walt Disney Concert Hall opened on October 23, 2003.


Toyota felt the billowing wood ceiling that hangs lightly over the space, strategically placed to achieve the early sound reflection was critical. It has been suggested that there is an illusion of being inside a living creature because of the resultant vibrancy of the sound.

The interior preconcert foyer mimics the finishes of the main auditorium, but instead of wood panels Douglas fir is used. The walls reach up to the roof, drawing light from one of the building's four large skylights. This space is one of the few places where the warmth of the interior paneling, the strength of the steel structure, and the California sunlight can simultaneously be experienced.

Not obvious from looking main entrance at street level, but there is a garden 34 feet above Hope Street on the top of the Concert Hall. It is a great vantage point to view many of Los Angeles landmarks. 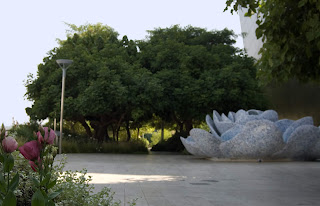 
The heat in the nearby condominiums resulted in skyrocketing electric bills. Certain spots on the sidewalk were reported to be 140°F. After complaints from the neighboring residents, a computer analysis of the building's surface was done. In 2005 the identifying panels were dulled by lightly sanding the panels to eliminate unwanted glare. 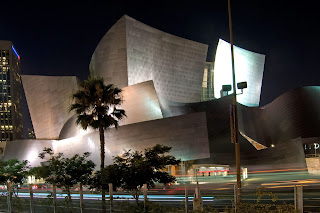