In 1892, Lewis Bradbury, a mining and real estate millionaire, had a plan to have a five story office building constructed close to the Bunker Hill neighborhood.   Sumner Hunt, a local architect, was hired to complete a design for the building, but was replaced with George H. Wyman. Bradbury felt that Wyman could understand his own vision for the building better than Hunt.There is no evidence that Wyman changed the design which leaves the identity of the building architect a subject of debate. Wyman designed other buildings in the Los Angeles area, but the Bradbury Building was his only major success. Sumner Hunt went on to design many other notable buildings including the Southwest Museum.

During construction of the building, an active spring was found beneath the work-site which could potentially shut down work on the building by weakening the foundation. Mr. Bradbury believed that this project would be greatest monument to his memory: he imported massive steel rails from Europe in order to bolster the building and allow construction to continue. Unfortunately Lewis Bradbury died months before the building opened in 1893.

Bradbury spared no expense for this project: the floors are composed of Mexican tile, the marble used for the stairs was imported from Belgium and the walls are made of pale grazed brick. The wrought-iron was executed in France and before being installed in the building it was displayed at the Chicago World's Fair. 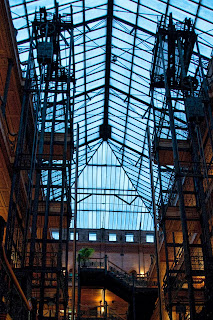